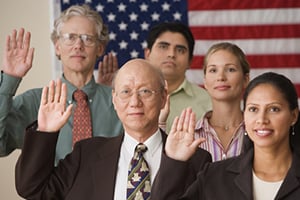 For lawful permanent residents, there are many benefits to becoming a naturalized United States citizen including (but not limited to):

In order to be eligible for naturalization, a foreign national must meet the following requirements:

After the application is submitted, an applicant will first be scheduled for a biometrics (fingerprint) appointment, and later an interview with a USCIS officer. During the interview, the USCIS officer will test the applicant’s ability to read and write English (with exceptions for certain long-term United States residents over a certain age, and persons with certain medical disabilities). The applicant will also be given an orally administered test of ten United States history and civics questions. An applicant must correctly answer six of the ten questions.

If everything goes well at the interview, and the application is approved, an applicant will receive an appointment in the mail for their naturalization oath ceremony. It is at this ceremony, where the individual will officially become an Untied States citizen.

If you or a family member are thinking about naturalization, Hartzman Law Firm is here to help.

Attorney Hartzman is experienced in the laws relating to naturalization and has assisted many individuals through the naturalization process. At Hartzman Law Firm, we will assist you in gathering the documents needed for your application, preparing and filing your application, preparing you for your interview with USCIS, and attending your interview with you.

If you would like to learn more about how Hartzman Law Firm can help you apply for citizenship, please call us at (412) 495-9849 or fill out a contact form online. We offer free consultations in person, by phone, and by secure video conferencing. Weekend consultations are also available by request.